TAIPEI, Taiwan — Taiwan’s voters delivered a stinging rebuke of China’s rising authoritarianism on Saturday by re-electing President Tsai Ing-wen, who vowed to preserve the island’s sovereignty in the face of Beijing’s intensifying efforts to bring it under its control.

Ms. Tsai’s victory highlighted how successfully her campaign had tapped into an electorate that is increasingly wary of China’s intentions. It also found momentum from months of protests in Hong Kong against Beijing’s encroachment on the semiautonomous Chinese territory’s freedoms.

For China’s ruling Communist Party, the outcome is a dramatic display of the power of Hong Kong’s antigovernment protest movement to influence attitudes toward the mainland in other regions the party deems critical to its interests.

China’s authoritarian leader, Xi Jinping, has warned Taiwan that unification between the sides was inevitable. His party has sought to court Taiwanese with opportunities to work in the mainland while isolating Ms. Tsai’s administration and said that China would use force, if necessary, to prevent the island from taking steps toward formal independence.

The vote, which was a reversal of Ms. Tsai’s political fortunes, suggested that Beijing’s pressure campaign had backfired. It could widen the political and cultural gulf across the Taiwan Strait and might raise the specter of armed conflict, which could have implications for the United States.

In her victory speech, Ms. Tsai called for unity as she pledged to work to defend the island’s sovereignty and improve the economy.

“With each presidential election, Taiwan is showing the world how much we cherish our democratic way of life,” she said at a news conference in Taipei. “We must work to keep our country safe and defend our sovereignty.”

The vote drew a large turnout including thousands who flew home from abroad. Lines of voters snaked through schools and other public spaces. Willie Yu, 23, who cast his ballot at the Taipei Municipal Jinhua Junior High School, said he had come out to vote because “I hope Taiwan can preserve its democracy and freedom.” 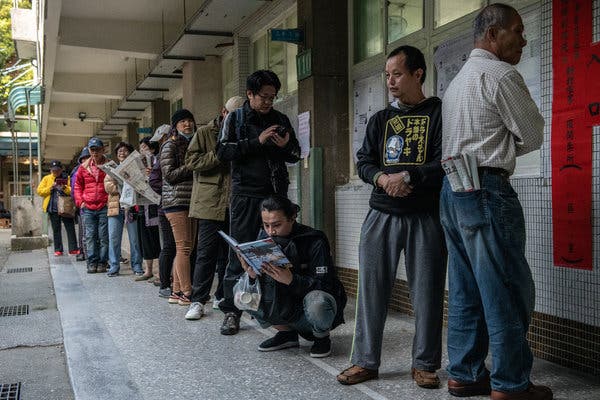 Ms. Tsai’s main opponent, Han Kuo-yu, a populist mayor, conceded defeat on Saturday evening, saying he had called Ms. Tsai to congratulate her on her re-election.

“I can only say that I didn’t work hard enough to live up to everyone’s expectations,” he told his supporters.

During his campaign, Mr. Han had pledged to restore closer relations with the mainland but then found himself on the defensive because of China’s increasingly authoritarian actions. Ms. Tsai and her supporters had cited the Hong Kong protests as an ominous example of what unification on the Communist Party’s terms would portend for Taiwan’s young and vibrant, if messy at times, democratic society.

“Taiwan must be Taiwan,” Hiro Huang, a 30-year-old filmmaker, said this past week at a rally for Ms. Tsai and her party, the Democratic Progress Party. He cited national security and the protection of Taiwan’s sovereignty as the principal reasons for his vote for Ms. Tsai.

“After all, we are completely different from the system on the other side,” he added.

That much was clear in the campaign, in which the candidates offered divergent visions of Taiwan’s economic and political path and contested them openly in ways that would be unthinkable in today’s China, where the party cracks down on dissent.

In China, a spokesman for the department overseeing Taiwan affairs, Ma Xiaoguang, issued a statement that avoided even mentioning Ms. Tsai’s name but warned that Beijing resolutely opposed any form of “separatist conspiracy” in Taiwan, the Xinhua news agency reported late Saturday.

Ms. Tsai defeated Mr. Han and a third candidate, James Soong. She exceeded her vote total from four years ago, surpassing eight million votes, the most garnered by any candidate since direct presidential elections began in 1996, according to unofficial results.

The victory completed a remarkable comeback for Ms. Tsai, who only a year ago appeared to have little chance of winning. The election underscored support for a distinct Taiwanese identity and the extent to which public sentiment had drifted further from the idea of a single, unified China.

China’s efforts to intimidate Taiwan allowed her to portray herself as a defender of the island’s democracy and sovereignty. In the months leading up to the vote, officials warned that China was trying to sway the outcome with online disinformation campaigns. A would-be defector detailed what he claimed were covert efforts by Chinese military intelligence to manipulate the outcome of elections in Taiwan. 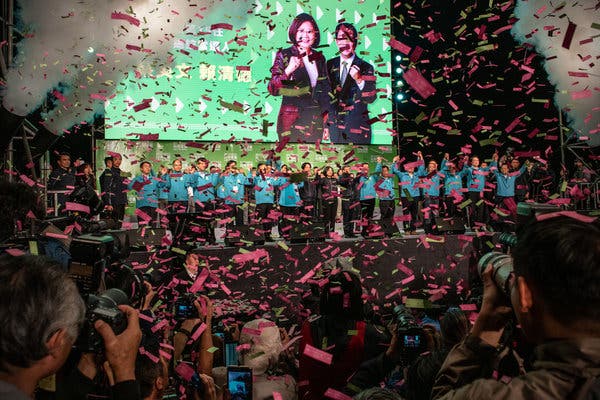 Taiwan became the Republic of China after the national Kuomintang forces of Chiang Kai-shek retreated to the island following the Communist revolution in 1949. It has never been part of the People’s Republic of China, and since its transition to democracy following decades of martial law, it has developed a distinct identity that makes unification with China seem more unlikely than ever — despite Mr. Xi’s efforts to encourage it.

Mr. Xi has said that Taiwan could join the People’s Republic and still preserve its political and social freedoms under the “one country, two systems” political formula that governs Hong Kong and Macau, former colonies that returned to Chinese rule in the 1990s. Ms. Tsai has rejected the proposal.

“Young people in Hong Kong have used their lives and blood and tears to show us that ‘one country, two systems’ is not possible,” Ms. Tsai said at a large rally in Taipei on Friday night. “Tomorrow it’s the turn of our young people in Taiwan to show them that the values of democracy and freedom will overcome all difficulties.”

China’s efforts to isolate Ms. Tsai’s administration and to punish the island economically — by, forbidding tourist travel by Chinese citizens this year, for example — failed to deliver the desired outcome. Ms. Tsai’s government has presided over an improving economy, with the lowest unemployment rate in two decades (3.8 percent on average) and rising wages. She also lured manufacturers back from overseas, which might be a benefit of the trade war between the United States and China.

The question now is whether China will change its tactics, reaching out at last to Ms. Tsai’s administration or, as some hawkish voices in Beijing have suggested, turning to more forceful actions.

“Xi Jinping will be under enormous pressure at home for failing the ‘one country, two system’ model,” said Su Chi, a former legislator and government minister for the Kuomintang who served as an adviser to Mr. Han’s campaign.

He warned that Mr. Xi’s government could very likely take steps to halt what officials there view as Taiwan’s further drift away from the possibility of unification. “Short of military conflict, short of an invasion,” he said, “it will take punitive actions to teach Taiwan a lesson.”

The potential for military conflict has always hovered over the relationship. At a conference in Beijing last month, hawkish officials openly called for China to take more aggressive measures. Wang Hongguang, a retired lieutenant general in the People’s Liberation Army, declared that “the window for peaceful reunification has already closed in Taiwan.”

In her first term, Ms. Tsai sought to revive the island’s military in the face of a much larger, more ambitious project by Mr. Xi to modernize the People’s Liberation Army, particularly its ability to project naval power beyond its coastal waters. China’s newest aircraft carrier, the Shandong, has twice sailed through the Taiwan Strait during the presidential campaign. 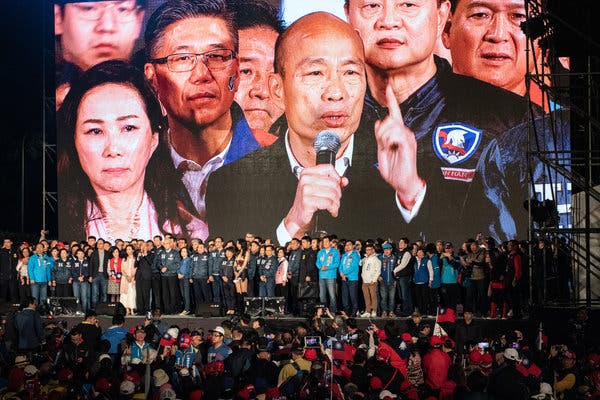 Only days before the vote, Taiwan’s top uniformed officer, Gen. Shen Yi-ming, died when the American Black Hawk helicopter he was flying in crashed near the capital.

Ms. Tsai’s predecessor, Ma Ying-jeou, sought to forge closer economic and political ties with the mainland, and even met with Mr. Xi in 2015. Without a drastic shift in tactics by Beijing, the prospect of warming relations during a second Tsai term appears slim.

“This cold confrontation between the two sides of the strait will continue,” Zhu Songling, a professor at Beijing Union University, said.

Beijing has insisted that Ms. Tsai disavow the provision of her party’s charter recognizing Taiwan as an independent country as a condition for any improvement in relations. Ms. Tsai has refused, carefully maintaining a balance among her own supporters between a declaration of independence and de facto steps to strengthen diplomatic and economic ties with other nations, especially the United States and Japan.

Mr. Han, who in 2018 was elected mayor of the southern city Kaohsiung, said that Ms. Tsai and her party had harmed Taiwan’s economy by pivoting away from reliance on China. At a Thursday-night rally attended by tens of thousands, he led supporters in a call and response.

“Dear friends, are you satisfied with the current situation?” he asked the crowd, which responded in unison: “We’re dissatisfied!”

At the Kuomintang’s office in Kaohsiung on Saturday, Tsai Jie-wen, a 60-year-old retired soldier, blamed the president for the chill in relations with Beijing.

“There is no diplomatic contact with the mainland China at all,” he said. “This is a very, very big loss for Taiwanese people.”

In the end, however, people seemed more worried about the fate of Taiwan’s de facto independence from China.

“Having seen what’s happening in Hong Kong, I get it: the so-called one country, two systems is a Communist lie,” said Allen Hsu, a student in Hong Kong who returned home to vote.

“I hope Taiwan doesn’t end up sharing the same fate, with my children having to take to the streets 20 years from now to oppose the Communist Party.”